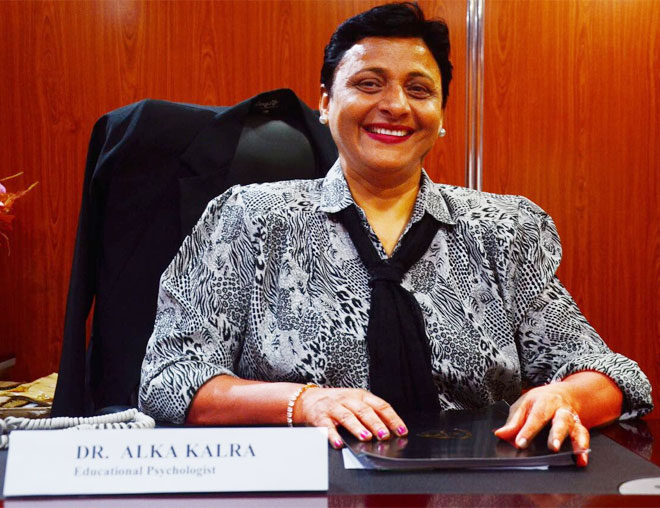 Director, Consultant - ECCE
Dr. Alka is renowned Psychologist and a Professional Counsellor who is known as a crusader for children who are misperceived as underachievers. With her Unnerving passion for children who have hidden learning difficulties, Dr. Alka wanted them to never undermine themselves and realize that they have unique skills and strengths. To work on these children she established EDUSCAN in 1995. Eduscan is an institute where we take the failures of a regular education facility and turn it around.

Within the span of two decades in the U. A. E. Dr. Alka has changed the lives of numerous children who struggled at school due to their non-performance they are now in the roles of white collar jobs with good portfolios and are very successful in their lives. We have Life time correction program for the student who are poor in math and have reading, writing and spelling difficulties. Dr. Alka provides training to educators and travels frequently to Malaysia, South Africa, India, Bangkok etc. She believes training teachers is incredibly crucial as they can touch many lives. Eduscan also offers adult programs such as the “Walk on Fire” where participants walk on burning coals without a single blister which Dr. Alka calls a “life changing” experience. Community Development Authority (Dubai) certified psychologist Dr. Alka is famous for assessment of personality, aptitude intelligence, ADHD and hidden learning difficulties etc.

For an accomplished and passionate academician to venture into entrepreneurship and come up shining was a challenge by any means. When that venture included education of children with special needs it became all the more difficult and a task that could only be achieved by someone with the competence and commitment of Dr. Alka. She had earned her Ph.D. and had her Post-Doctoral Research from University of Pittsburg- USA, before which she had done her Master’s in Psychology and Bachelor’s in Science from Sagar University in India. She also earned a second Master’s Degree of Education from famous Aligarh Muslim University. Displaying a record for excellence throughout her life, Dr. Alka was a Gold Medalist and University Topper during her Master’s Degree course. Having surfed the heights of academic excellence she surprises people with her simplicity and with the way in which she finds contentment in teaching students with learning difficulties.

A true all-rounder, she was also the winner of the Best Cadet Award in the NCC and received the Gold Medal from the late Prime Minister Mrs. Indira Gandhi. She was also chosen for an international student exchange program and went to Canada for the course during which she discovered her interest in Psychology and decided to take it up as her lifetime career. Some of the other major awards she has won are “Woman of the Year Award” by International Women Association, Lady of the Year award by Indian Ladies Association and Lioness of the Year Award by Lions Club International. She was the Vice-President of Indian Ladies Association Abu Dhabi for three years. The latest feather in cap of success is that she is honoured to be Super Hundred Women Achiever from India in Middle East & Africa.